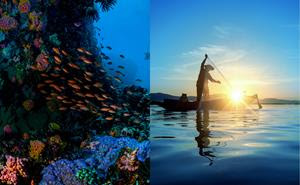 The Ocean: Life and Livelihoods

NEW YORK, June 02, 2021 (GLOBE NEWSWIRE) — On Monday 8 June, the United Nations will launch its second-ever fully digital rendition of its annual World Oceans Day event in celebration of its 2021 theme, The Ocean: Life and Livelihoods. Produced in partnership with the non-profit organization Oceanic Global, presented by Blancpain and supported by La Mer, United Nations World Oceans Day 2021 (UNWOD) will be a day-long event featuring keynote speeches, panels, and presentations kicked off by the United Nations Secretary-General and the President of the General Assembly, with leading voices including: Dr. Sylvia Earle, Gael Garcia Bernal, Jean-Michael Cousteau, Alessandra Ambrosio, Sam Waterston, Nathalie Kelley, Danni Washington, Dona Bertarelli, Céline Semaan, Amanda Cerny, and more. While traditionally an in-person event at the UN Headquarters, due to COVID-19, UN WOD became fully virtual and open-to-the-public for the first time in 2020. This year’s celebration will again be open to the world by live stream from 10:00AM-5:00PM (EDT) on the United Nations World Oceans Day website (www.unworldoceansday.org/2021) with the content reshared on the social channels @unworldoceansday. [The UNWOD event will also incorporate a closing concert as part of the day’s programming from 4:30PM-5:30pm (EDT), featuring performances by international musicians including EARTHGANG, Angélique Kidjo, Bomba Estéreo, Little Dragon, Valerie June, Seun Kuti & Egypt 80, and Penguin Cafe.]

The ocean produces at least 50% of the planet’s oxygen, is home to most of earth’s biodiversity, nourishes billions of people and employs millions worldwide. Humanity’s interconnectivity to the ocean is core to our identities, cultures, and ways of life. Since its inception in 2008, UN World Oceans Day has celebrated the ocean and its importance to our planet and our lives. Yet, over the course of the pandemic, the world saw more clearly than ever, just how reliant on the ocean we collectively are. The 2021 United Nations World Oceans Day theme The Ocean: Live and Livelihoods sheds light on the wonder of the ocean and how it is our lifesource, supporting humanity and every other organism on Earth. The event will convene scientists, explorers, experts, and coastal communities from around the world to deepen our understanding of the ocean, explore our connection to it, and discuss the need for building a new balance with the ocean that is inclusive, innovative and informed by those who depend on the it, as well as by lessons from the past.

A photo and a video accompanying this announcement are available at: