The release of an annual letter from Bill and Melinda Gates has become an event akin to the State of the Union Address for the international development and health crowd. The big highlights from this year: The Gates’ predict what life will be like in 2030, including worldwide child deaths halved; diseases like, polio, guinea worm and river blindness will be eradicated; and a cure for malaria. Also, the Gates’ announce an ambitious plan to organize “global citizens” and are ambitiously backing the UN’s Sustainable Development Goals. Read the letter. Read a news story about the letter from Reuters.

Why Obama’s India visit is such a big deal…President Obama is heading to India this weekend. This is the first time that a president will visit India twice while in office. Tanvi Madan of Brookings explains the significance of this trip, what can be expected on the climate change front and why this trip could have profound historic consequences. (Global Dispatches Podcast http://bit.ly/1yVcGMR)

Saudi Arabia’s long King Abdullah has died at the age of 90. He was best described as a cautious reformer.  The transition to Prince Salman seems to be smooth, at least on the surface. NYT http://nyti.ms/1yVchKk

Is private equity really hot for sub-saharan Africa? The Economist thinks so. http://econ.st/1CHO2wo

Sierra Leone said on Thursday it would reopen schools across the country in March, with the deadly Ebola epidemic slowing throughout west Africa. (AFP http://yhoo.it/1E6B6V3)

Even though the Ebola outbreak in West Africa continues, the U.N. says it’s time to plan for the recovery of Guinea, Liberia and Sierra Leone. A joint mission has just completed its assessment in Sierra Leone. (VOA http://bit.ly/1t2AaNp)

Recent news reports indicate a drop in the number of new cases the three countries hardest hit by the Ebola: Guinea, Liberia, and Sierra Leone.  Some treatment centers built with foreign aid are operating at a fraction of their capacity.  Health care specialists say now’s the time to focus on revitalizing weakened health care systems. (VOA http://bit.ly/1t2AjAp)

The Democratic Republic of Congo‘s Senate has announced a one-day delay for its vote on a proposed electoral law that has sparked days of violent protests. Senators now say they will vote Friday on the bill, which would require completion of a national census before a presidential election can be held. (VOA http://bit.ly/1t2AcVr)

Nigeria should delay next month’s elections to give organisers more time to distribute millions of biometric ID cards to voters, the country’s top security official said on Thursday. (Reuters http://bit.ly/1CGddPT)

Madagascar’s opposition is to challenge the appointment of Prime Minister Jean Ravelonarivo in the constitutional court after the administrative court said it would not hear the case, extending uncertainty in a country struggling to repair its economy. (Reuters http://bit.ly/1yJMCTa)

A new report by Human Rights Watch accuses the Ethiopia’s government of systematically cracking down on media ahead of the May 2015 elections. The report, released Thursday, details how Ethiopia has restricted independent reporting since 2010. (VOA http://bit.ly/1y3sq9r)

In Kenya, the rise of drug resistant bacteria could reverse the gains made by medical science over diseases that were once treatable. Kenyans could be at risk of fatalities as a result if the power in antibiotics is not preserved. (VOA http://bit.ly/1y3sB4K)

An outbreak of H5N1 bird flu in Nigeria has spread to 21 commercial farms in seven different states, with more than 140,000 birds having been exposed to the virus, the agriculture minister said on Thursday. (Reuters http://bit.ly/1y3uXAC)

The slaughter of rhinos in South Africa hit a new record in 2014, with poachers killing 1,215 of the iconic savannah animals as Asian-led demand for their horn showed no sign of abating, authorities said Thursday. (AFP http://yhoo.it/1E6B8fC)

The U.N. agency in charge of aiding Palestinians will run out of money by the end of January to repair homes in Gaza damaged in the 2014 war with Israel, worsening an already dire humanitarian situation, an agency spokesman said on Thursday. (TRF http://yhoo.it/1Bi67lg)

It is an unlikely friendship that ties the fates of war correspondent Kenji Goto and troubled loner Haruna Yukawa, the two Japanese hostages for whom Islamic State militants demanded a $200 million ransom this week. (Reuters http://yhoo.it/1ClB3CO)

It costs thousands of euros for a false passport and place on a boat to Turkey, but Syrian refugees stranded in Cyprus are ready to try anything. (AFP http://yhoo.it/1Bi6E6B)

Pakistan says it wants an early repatriation of Afghan refugees in the country but does not intend to forcefully evict them. Meanwhile, Afghan officials are warning that unwarranted pressure on the refugee population as part of Islamabad’s increased counterterrorism measures could hinder bilateral ties. (VOA http://bit.ly/1t2zE20)

Cambodia has managed to reduce poverty in many parts of the country but admits it is still falling behind on many of its United Nations development targets as a deadline to reach such goals approaches. (VOA http://bit.ly/1y3rVMM)

The disclosure by a key United Nations witness, that parts of his testimony about his life in North Korean prison camps were untrue, is raising questions about the credibility of the U.N. report on human rights abuses in that country. (VOA http://bit.ly/1t2zHL9)

“We cannot be counted as citizens of the 21st century” Indian Prime Minister Narendra Modi said in a hard-hitting message to the country during the launch of a nationwide campaign to save and educate girls. (VOA http://bit.ly/1t2Afkn)

Thailand’s former Prime Minister Yingluck Shinawatra strongly defended herself in parliament before a vote by members on whether to impeach her for her role in a controversial rice subsidy scheme. (VOA http://bit.ly/1CGcC0C)

India will look to the United States for more private sector partnerships and technology to support a drive to expand its use of clean energy, as Washington looks to secure political support for a global climate change deal in 2015. (Reuters http://yhoo.it/1Cjdjiu)

Myanmar’s government has accused ethnic rebels of trying to scuttle a nationwide peace deal, as tensions soar in the northern state of Kachin, where an activist said sporadic clashes between the army and insurgents have trapped more than 1,800 villagers. (AP http://yhoo.it/15vNQ8U)

Amnesty International is calling on the Mexican government to investigate the army in the disappearance of 43 students in southern Mexico on September 26. (AP http://yhoo.it/1E7biIl)

A bill that would prohibit using federal money to pay for “any abortion” or for “health benefits coverage that includes coverage of abortion” has been approved by the US House of Representatives. (NPR http://n.pr/1Bit9IN)

Bill and Melinda Gates Want the UN to Get Real (Businessweek http://buswk.co/1E6Voxw)

Africa’s Economy Is Rising. Now What Happens to Its Food? (Upshot http://nyti.ms/1JdYD6r)

Is USAID Helping Haiti to Recover, or US Contractors to Make Millions? (The Nation http://bit.ly/1yKfKbw)

Why Boko Haram Has Stepped Up Attacks in Nigeria (UN Dispatch http://bit.ly/15tX5GK)

Every movie rewrites history. What American Sniper did is much, much worse. (Vox http://bit.ly/1CGBeX9)

The United Nations asked governments on Thursday to submit plans to cut greenhouse gas emissions as the building blocks of a deal due in Paris in December to limit global warming, after scientists said 2014 was the hottest year on record. (Reuters http://yhoo.it/1y3xAlQ)

Countries are divided on how a new global plan to reduce the risk of disasters should measure progress, with some governments opposed to setting numerical targets for cutting deaths and economic losses and protecting infrastructure. (TRF http://yhoo.it/1y3xHOi) 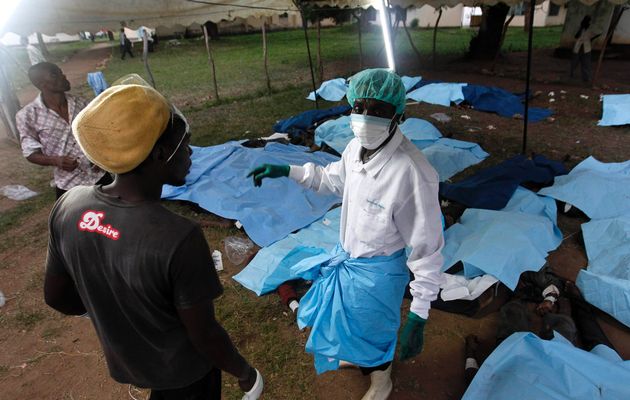 Al Shebab strikes again. “At least 50 people were killed when gunmen in two minibuses sped into a town on Kenya’s coast, shooting soccer fans watching a World Cup match in a television hall and targeting two hotels, a police post and a bank, officials and witnesses said on Monday. Police said Somalia’s al Shabaab Islamist group was most likely to blame for Sunday night’s assault on the town of Mpeketoni, which lies on the Indian Ocean coastline that runs north from Kenya’s main port of Mombasa to the Somali border. (Reuters http://bit.ly/1vsM8gz)

Want these clips delivered to your inbox? Sign up here.

At least two people were killed and 15 prisoners escaped after a suspected Islamist militant detainee shot his way out of the main jail in Mali’s capital Bamako on Monday, a government official said. (Reuters http://reut.rs/1nLAvOx)

Thousands of opposition supporters took to the streets on Sunday in Niger’s capital Niamey to demand that authorities respect civil liberties, following the arrest of several of their number last month. (Reuters http://bit.ly/1vsMJPm)

The daughter of Sudanese opposition leader Sadiq al-Mahdi said there can be no national political dialogue in Sudan when everything people say is criminalized and there is lack of press and religious freedom. (VOA http://bit.ly/1qksTpn)

Civilians displaced by brutal fighting in South Sudan are ignoring calls from government officials to return to their homes, preferring the safety of squalid UN bases to the risk that conflict could again engulf towns already devastated in the six-month conflict. (IRIN http://bit.ly/1qktqYp)

The recent successful holding of legislative and presidential elections has raised hopes that Guinea-Bissau can move closer to the end of a two-year political crisis marked by international isolation and a devastating economic decline. (IRIN http://bit.ly/1vsOPPb)

Concern is mounting that British aid money may be funding police who are using rape as a tool of state-sanctioned torture against women in the Democratic Republic of the Congo. (Guardian http://bit.ly/1qkv3W2)

The United States has ruled out co-ordinated military action with Iran as one of the options being considered to thwart radical Islamic extremists in Iraq as Sunni Muslim fighters seized another Iraqi city. (Irish Times http://bit.ly/1nLAmuw)

Once again Israelis are gripped by the horror of their young people being abducted, apparently by Palestinian extremists, and the army is pulling out all the stops to retrieve them. (Globe and Mail http://bit.ly/1nLArhL)

More than 60,000 people have fled North Waziristan Agency to safer parts of Pakistan and neighbouring Afghanistan as Pakistan’s military launches an offensive in the region. Most of the people fleeing are children, and mental health experts are concerned that they will not have access to proper trauma care. (IRIN http://bit.ly/1vt89f8)

Thailand’s military government ended a rice price-support scheme, put in place under the former civilian government, as investigations continue into widespread corruption and losses of billions of dollars from the program. (VOA http://bit.ly/1qktiYK)

A low level of knowledge about sexual abuse is leaving Cambodia’s children vulnerable to harm, and a new report shows that despite sex education initiatives in recent years, a poor understanding by parents and children of what sexual abuse is, persists. (IRIN http://bit.ly/1vsRmJ3)

Thailand’s junta denied on Monday that they were pursuing a “sweep and clean” policy of driving illegal foreign workers out of the country. (Reuters http://yhoo.it/1vsTdh7)

Myanmar opposition leader Aung San Suu Kyi said it is up to the will of the people of her country if she becomes their president, reacting Monday to a vote against changing a constitutional clause that bars her from the office. (AP http://yhoo.it/1qkvQWV)

The US Supreme Court has turned away Argentina’s appeal of lower court rulings ordering it to pay more than $1.3 billion to hedge funds that hold some of the country’s defaulted bonds. (AP http://yhoo.it/1vsWLzM)

Are we measuring the right things? The latest multidimensional poverty index is launched today – what do you think? (From Poverty to Power http://bit.ly/1nfGCJ8)

Aid insiders fret that major NGOs have become too big and have lost the flexibility and responsiveness they once had. (IRIN http://bit.ly/1qktQ0W)

Economic inequality is now center stage in the global debate, and the World Economic Forum asserts that this issue is the single biggest risk facing the planet. (CNN http://cnn.it/1vsRxEg)

The site you are trying to reach is currently unavailable.
We regret any inconvenience this may cause.
Please try again later.
Or try the corporate site at www.servicecanada.gc.ca