Memento Mori is the beautiful new book from Dr. Paul Koudounaris in which the tradition and culture of death is studied through the art of photography. Resplendent in blue satin with complimentary orange accents, Memento Mori is a visually striking tour across the globe to over thirty countries with photographs of human remains from over 250 sites taken by Dr. Koudounaris over a decade.

The photographic journey begins with the story of the mummy of a young girl, found in an Indonesian cave and adopted as a member of the family, which dresses and keeps her on display in a wooden box. Koudounaris asks his Indonesian guide if the idea of families keeping mummies in the home is unusual. He learns that his guide, as a young boy, slept in the same bed as the mummy of his grandfather. In contrast, such a tradition in American culture would be a nightmarish horror story. It brings to mind images from William Faulkner’s Southern Gothic short story A Rose for Emily or Hitchcock’s masterpiece Psycho, where both protagonists live with corpses of their loved ones. 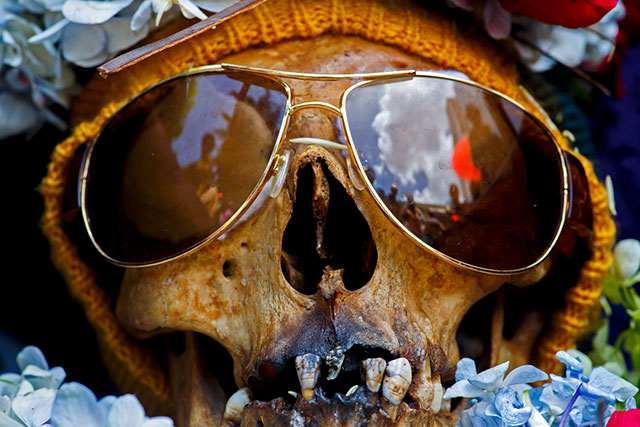 Other incredible sites experienced in Memento Mori include an isolated cave church and ossuary in Ethiopia, the magnificent Sedlec Ossuary in the Czech Republic (complete with an eight foot bone chandelier said to contain one of every bone in the human body), burial caves in Indonesia, comical and creepy Catholic mummies in Rome and Sicily, the “festival of the little pug nosed ones” in Bolivia and haunting modern memorials to genocide in Cambodia and Rwanda.

This book is a rare bird. There is really nothing like it that offers such insight into historical burial sites and monuments rarely, if ever, seen by anyone outside these cultures. Despite its macabre subject matter, Memento Mori is not morbid or depressing. Rather, it is an expressive celebration of life through images of death.

“By presenting the specter of death, these spaces affirm life: they ask us to remember those who lived before us, while simultaneously reminding us that our own lives are, and forever will be, linked to theirs in a cycle that is beyond the comprehension of mortal man”.