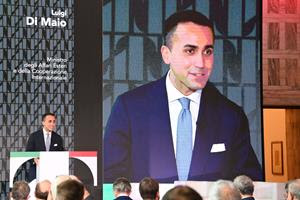 ROME, Nov. 30, 2021 (GLOBE NEWSWIRE) — (LaPresse) – An extraordinary communication campaign to promote Made in Italy, entitled ‘Italy is simply extraordinary: beIT’, has been successfully launched. The campaign, launched by the Italian Ministry of Foreign Affairs and International Cooperation in collaboration with the Italian Trade Agency (ICE), will have a global dimension with a particular focus on 26 countries.

“’beIT’ is the first nation-branding campaign ever created for Italy,” explained Foreign Minister Luigi Di Maio, “with a new approach that stands out from what has been done so far; the project we have launched is complex and ambitious, as it aims to tell the international public about Italy today, at 360°”. The campaign has two main objectives: to tell the international public about Italy, its values and talents, its skills and extraordinary potential in an original and innovative way; and to support the internationalisation of Italy’s supply chains, expanding and diversifying the foreign markets of reference for Italian SMEs.

The ‘beIT’ campaign “conveys a new image of Italy”: “the image associated with stereotypes is well known and established, but the image of a cutting-edge Italy, at the forefront of technology and innovation, is not as readily acknowledged. We are leaders in many sectors and markets that are extremely innovative, yet these aspects are not known. The idea behind this campaign is to move in this direction and tell the story of a new Italy”, explained Franco Pomilio, CEO of the communication agency Pomilio Blumm, which won the call for tenders to design the campaign.

“’beIT’, which was designed with the idea of being ‘disruptive’, of creating a narrative of the Italian System, a narrative from the bottom up where content is partly produced by us and partly by the network of the Ministry of Foreign Affairs and the Agency for Development Cooperation: it is a large container that aims to become a platform to promote what it means to be Italian”, Pomilio stressed.

The campaign was launched on 29 November 2021 and will run until August 2022, divided into two phases. The first phase will run from November 2021 to March 2022 and will focus on the ‘values’ that identify Italy: creativity, passion, tradition, style, innovation, and diversity. The second phase will see the implementation of targeted campaigns, from March to August 2022, aimed at promoting Made in Italy production chains.

The communication campaign will focus on the digital channels and will involve the creation of a new visual and linguistic identity for all activities promoting Italy around the world, as well as dedicated platforms and landing pages, social profiles, and original content. The campaign will also have a ‘green’ slant, in collaboration with the Italian company Treedom.

A photo accompanying this announcement is available at https://www.globenewswire.com/NewsRoom/AttachmentNg/9c8a43cd-db39-459b-a413-05b62668597b