Group Adjusted EBITDA of $3.3 Billion, up 1% Year-On-Year Despite Challenging Environment

GEG: Returning Surplus Capital To Shareholders During The Quarter

"Our results represent a strong performance in the face of strong macro headwinds, underlining the enduring appeal of our properties and management’s rigorous focus on growing revenues and driving efficiencies across the business.

During the quarter we completed our 10th year of operation in Macau and to celebrate we announced the establishment of the GEG Foundation. The Foundation primarily aims to educate and empower young people in Macau and on the Mainland.

We are pleased that both of our flagship properties performed well in the period. Galaxy Macau™ delivered solid financial results, and StarWorld Macau’s EBITDA performance was in line with the same quarter last year and ahead of the previous quarter.

We remain very optimistic about Macau’s medium to longer term prospects and excited that Galaxy Macau­™ Phase 2 is on schedule to complete on time and on budget by mid-2015. It will significantly increase the property’s inventory of five star luxury hotel rooms and its high-end retail and leisure space, strengthening Galaxy Macau™‘s status as a first choice destination for discerning, higher value customers.

The redevelopment on the Grand Waldo Complex is on schedule and we plan to unveil our exciting conceptual plans in January 2015. The emphasis will be Family Friendly leisure and entertainment for the middle-class supported by many local Macau businesses.

As always, I would like to thank our team of 16,000 staff for their commitment to provide customers with a truly memorable experience, by offering the highest quality resort facilities and delivering ‘World Class, Asian Heart’ service. We believe that this truly differentiates GEG." 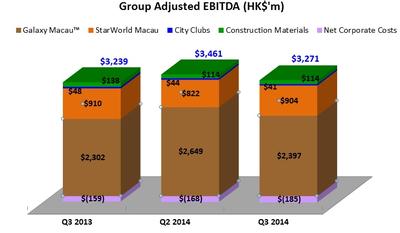 Galaxy Macau™’s revenue in the third quarter increased by 11% year-on-year to $11.1 billion and Adjusted EBITDA grew 4% to $2.4 billion. These good results were driven by robust performances in both the VIP and mass gaming segments, where revenue increased by 12% to $7.2 billion and by 12% to $3.1 billion, respectively. Non-gaming revenue increased 3% to $386 million. Hotel occupancy rates at the property’s three five star hotels averaged 99% for the quarter.

StarWorld Macau delivered Adjusted EBITDA of $904 million, broadly flat on the same period last year and up 10% sequentially.  Revenue increased by 0.5% year-on-year to $5.7 billion. These results were achieved off the back of continuing good growth in the mass gaming segment, where revenue increased by 10% year-on-year to $1.1 billion, and a solid performance in the VIP segment, which saw a modest 2% reduction in revenue to $4.4 billion.  Hotel occupancy was 99% for the quarter.

City Clubs achieved $41 million of Adjusted EBITDA in the quarter.

GEG currently offers approximately a total of 2,700 five-star hotel rooms and has been operating at near maximum occupancy. To meet the expected growth in demand and to provide visitors with a more complete entertainment, retail and food & beverage offer, GEG has ambitious plans to build out the largest development pipeline in the Macau gaming market and the global gaming industry.

Phase 2 of Galaxy Macau™ will add approximately a further 1,350 five-star hotel rooms targeting higher value customers and will dramatically extend the property’s retail offer. We are confident that it will complete by mid-2015 as Macau’s next major resort. We are expanding our retail offering to approximately 100,000 square metres and are pleased to report that the space is virtually fully leased and that it has secured world renowned brands where we will be introducing a number of new brands to Macau. GEG expects that the expanded Galaxy Macau™ will capture a new wave of higher value visitors and believes that it has a distinct advantage in being the first operator to open new capacity in 2015.

The redevelopment on the Grand Waldo Complex is on schedule and we plan to unveil our exciting conceptual plans in January 2015 with the aim to re-launch the Complex in early 2015.  The emphasis will be Family Friendly leisure and entertainment for the middle-class.  We are particularly pleased that a number of Macau’s SMEs will be joining GEG and participating in the success of the Grand Waldo Complex.

For the long term, GEG is set to begin initial works for Cotai Phases 3 & 4 and is advancing conceptual plans for its 2.7 square kilometre land parcel on Hengqin Island.

To celebrate the Group’s 10th year in operation, GEG announced the establishment of the GEG Foundation on 4 July 2014.  Initially funded with $300 million and a further commitment of another $1 billion due later on, the Foundation aims to educate and empower young people in Macau and on the Mainland.

Reflecting GEG’s confidence in its future prospects and its ability to generate surplus cash, even while developing Macau’s largest development pipeline, a special dividend of $0.70 per share was paid to shareholders on 31 July 2014.

GEG continues to be optimistic about its future prospects and those of Macau as a whole. While 2014 has been a more challenging year for the industry, primarily as a result of economic headwinds, the appeal of Macau as a recreational and holiday destination for Mainland Chinese visitors is undiminished. This is illustrated by visitation in the first nine months of the year growing a healthy 7% year-on-year to 23.5 million. Furthermore, the fundamental long term drivers for growth remain unaltered, with major infrastructure works and increasing domestic consumption in Mainland China set to drive substantial visitation growth for many years to come.

With a high quality property portfolio, powerful brand and extensive development pipeline, GEG has a unique platform to attract new higher value customers, drive profitability and selectively returns surplus capital to its shareholders. Phase 2 of Galaxy Macau™ is on schedule to be the next major resort to complete in Macau by mid-2015. We plan to unveil our exciting conceptual plans for the Grand Waldo Complex in January 2015 with the aim to re-launch the Complex in early 2015.  Management is deeply excited by the breadth and scale of the expanded property’s offer and is confident it will further fulfil GEG’s promise of providing customers with the very best facilities and service of any integrated resort in Macau.

[2]ROI calculated based on the total Adjusted EBITDA for the latest twelve months divided by gross book value through 30 September 2014 including allocated land cost.

[3]ROI calculated based on the total Adjusted EBITDA for the latest twelve months divided by gross book value through 30 September 2014 including allocated land cost.

Galaxy Entertainment Group Limited ("GEG") is one of Asia’s leading gaming and entertainment corporations, and is a member of the Hang Seng Index.

GEG primarily develops and operates hotels, gaming and integrated resort facilities in Macau, the only legal gaming location in China and the largest gaming entertainment market in the world.

The two flagship properties of GEG include Galaxy Macau™, a world class integrated destination resort opened in May 2011 at Cotai, and StarWorld Macau, an award-winning property opened in 2006 on the Macau peninsula.

In April 2012, GEG announced the development of Galaxy Macau™ Phase 2 that will nearly double the size of the existing resort to one million square metres. Upon its targeted completion by mid-2015, Galaxy Macau™ Phase 2 will bring to Macau some of the most exciting entertainment, leisure, retail and MICE facilities. In December 2012, GEG outlined its concept plans for Phases 3 & 4 of its Cotai landbank and expects to commence site investigation works as early as late 2014.

GEG has entered into a framework agreement with the Hengqin Island authority to develop a 2.7 square kilometre land parcel for a world class destination resort in Hengqin Island. This project will complement GEG’s business in Macau and differentiate us from our peers, as well as play a key role in supporting Macau to become a world centre of tourism and leisure.