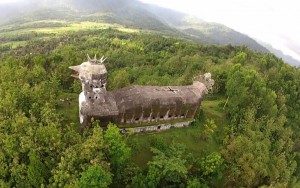 Jungles are notorious for swallowing up long-forgotten structures, but this crumbling and abandoned building is an unusual specimen.

The structure is known locally as Gereja Ayam – or Chicken Church, reports Jay Akbar For Mailonline. Its crumbling facade, located in the hills of Magelang, Central Java, attracts many curious travelers and photographers.

Originally built as a prayer house (and not as a church) by 67-year-old Daniel Alamsjah, the structure was supposed to resemble a dove, but the locals prefer to think of it as a chicken.

In addition to being a prayer house, the building was used as a rehabilitation center to treat disabled children, drug addicts, and others in need.

After construction costs became too steep, Alamsjah was forced to shut the center’s doors fifteen years ago. But that hasn’t stopped the many people who still flock to the beautiful site in Indonesia.

A short video tour of this unique building is available here.

Next Article: Should this lake really exist?